Orlando Taco Week (Sept. 23-Oct. 7, 2020) and Orlando Burger Week (Nov. 4-18, 2020), whose fate had previously been uncertain in light of the pandemic, have both officially been rescheduled in the wake of a successful Bite30 and thanks to the support of corporate partners dedicated to helping local restaurants during these tough times. Both promotions happen at local restaurants throughout the region, similar to Bite30, while Taco Week features $5 taco deals and Burger Week features $5 specialty burgers. Both have been extended from 10 to 15 days, and in addition to the $5 specials, restaurants are being encouraged to add creative and delicious tacos and burgers to the special menus at whatever price point they choose, giving diners additional options.

“Last year was our first year for these promotions. Though not a financial success for Orlando Weekly, participation from restaurants and consumers was strong. We are so grateful to the corporate sponsors – Publix, Corona, Hard Rock Cafe and Tito’s Handmade Vodka – who have stepped up this year to make it possible to do these again, especially in these tough times,” said Graham Jarrett, Orlando Weekly publisher and founder of Orlando Taco Week and Orlando Burger Week.

The success of Bite30, which was quickly resurrected after Phase Two re-opening and replacing sponsorship dollars lost due to COVID, motivated Orlando Weekly to push forward with these other two in-restaurant promotions. “Bite30 has made a significant impact on my business,” said first-time participant Tim Green, owner of the new 534 Scratch Kitchen directly across from Exploria Stadium in Parramore. “Whatever we can do to keep this going, I’m in.”

Jarrett’s personal experience during Burger Week last year spurred the change to add options in addition to the $5 special. When dining with a party of six, he realized that to participate in the promotion, every person at the table would have to order the same meal. “The appeal of Bite30 is experiencing so much variety and comparing all the food with the people at your table. I want to bring that to Burger Week and Taco Week. I realized as a diner, I would be willing to pay a little more for another choice.” He added that the $5 deal has to be a great value and truly unique to attract customers to the restaurant, and said he hopes even more over-the-top choices will be added this year that wouldn’t be possible at a $5 price point. 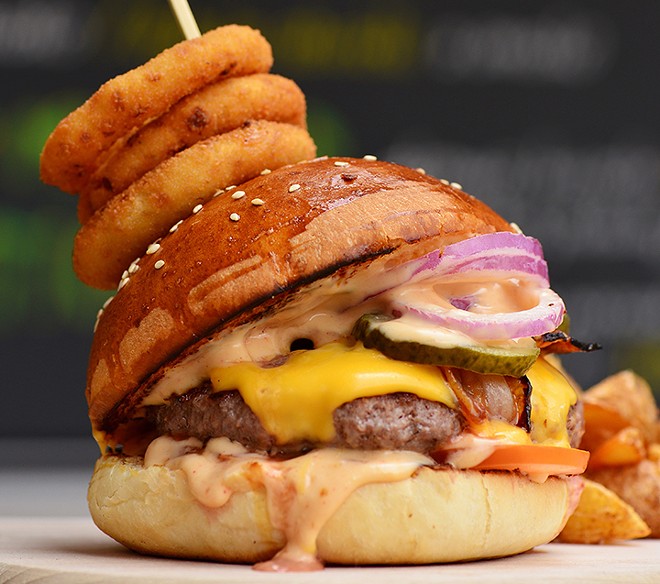 “I’m sure a huge part of Tim’s success at 534 Scratch came from his menu – lobster rolls, crab cake sliders, ribeye. His menu was a full page of delicious-sounding dishes. It’s hard to read that and not consider this brand-new restaurant during Bite30.”

Similar to Bite30, Taco Week and Burger Week will have takeout options this year in response to COVID. There will be a $5 surcharge added to each takeout order total – the surcharge helps cover the cost of takeout supplies, and compensates for the compromised ability of upsells that restaurants depend on to make these discount promotions work for them. All revenues, whether dine-in or takeout, go exclusively to the restaurants.

“We received some outrage from the public when we did not initially offer takeout with Bite30 this year. Then we experienced outrage from some restaurants when we added takeout, because they felt they could not afford to offer it, even at a $5 per Bite30 surcharge. Then we got outrage from the public who couldn’t believe we would dare charge more for what they considered a necessity for safety during a health and economic crisis and couldn’t understand how or why a restaurant would be outraged that we offered it,” said editor Jessica Bryce Young, who concedes there is no perfect solution, but believes the promotions have to evolve to match the moment.

“I asked a dear friend who loves Bite30 and used to be integral in producing it to dinner during the promotion this year,” related Jarrett. “She declined and told me she had had Maxine’s and Delaney’s so far, but would only do takeout. She simply was not ready to dine-in. So our options are to offer takeout or completely alienate some consumers. Not offering takeout isn’t going to force those who are not comfortable into dining in at this moment. They simply won’t participate and won’t be patronizing these restaurant partners. On the other hand, I dined at several Bite30 restaurants, all of which were following safety protocols, and I felt safe and had no issues.”

Exposing Central Floridians to creative local cuisine and supporting local chefs and restaurants who are contributing to that culture started decades ago with dining reviews in Orlando Weekly’s print edition. Over the years, that has expanded to include daily blogs, social media posts, advertising from local restaurants, and events designed to showcase local cuisine, such as Bite Night, Tacos and Tequila, Bite30, Taco Week and Burger Week – all created to drive consumers to try new restaurants and experience what they have to offer.

“We connect locals with the food being produced here and shine a light on all types of quality, creative, local cuisine. I don’t know if there’s any one entity that does this more than Orlando Weekly. We have always had a special and symbiotic relationship with restaurants, and we’ve likely never needed one another more than we do today,” commented Orlando Weekly’s longtime restaurant critic, Faiyaz Kara.

Next month’s Taco Week will feature a variety of restaurants, from traditional Mexican to less traditional choices, including Orlando Meats and Wine4Oysters. This year’s restaurants will begin to be posted shortly on orlandotacoweek.com, and any restaurants interested in participating should go here.