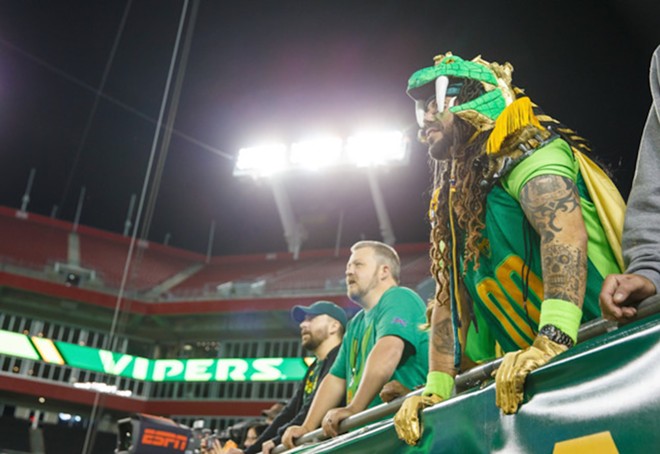 A recent column on the XFL Newsroom posed a simple question: When the XFL returns, should the Tampa Bay Vipers stay in Tampa?

The column cites poor attendance compared to the other XFL teams for the games played at Raymond James Stadium, explains how the XFL could capitalize on the markets created by the recently deceased Alliance of American Football (AAF), and gets into how the recent hype surrounding the Bucs could make the Vipers an “afterthought” to football fans in Tampa.

The column proposed that the Vipers move to was Orlando, which had the Orlando Apollos in the AAF, coached by former-Buc Steve Spurrier. The Apollos enjoyed moderate success in both attendance numbers, drawing close to 20,000 fans a game, and on the field, posting a 7-1 record under the “Head Ball Coach.”

This is all speculation, as the XFL has yet to release any official statements on what will happen with the XFL restart. There have been a lot of different ideas floated around, including having a “bubble” city to host all the games, similar to what the NBA and NHL have done. This would obviously make the whole idea of moving the Vipers to Orlando pointless for 2021, but the concept could be explored if the XFL enjoys enough success to have a 2022 season. Remember, the XFL has yet to stay alive long enough for back-to-back seasons.

Regardless of which city the Vipers “play” in, they would be smart to look into hiring Spurrier.

He’s quite popular in Florida, as he was a star QB at the University of Florida and later coached the Gators to a national championship.

Orlando has expressed interest in stealing the Rays from Tampa Bay, so losing the Vipers to the Mouse’s city would be a bad sign. Either way, we’ll get to see the Vipers go 2-10 and disappoint us all over again.

This story originally appeared in our sister paper Creative Loafing Tampa Bay.
_
Please follow CDC guidelines and Orange County advisories to stay safe, and please support this free publication. Our small but mighty team is working tirelessly to bring you news on how coronavirus is affecting Central Florida. Please consider making a one-time or monthly donation. Every little bit helps.