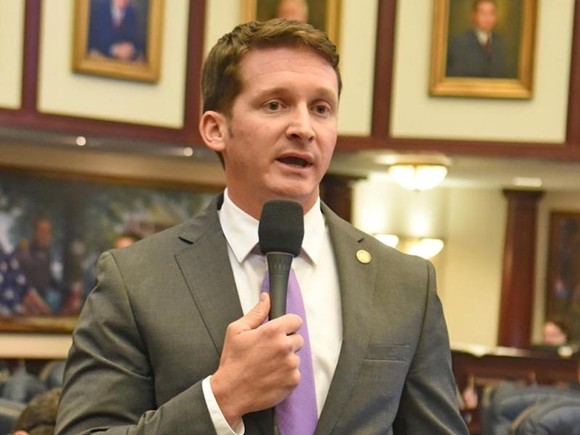 Rep. Dane Eagle, the outgoing House majority leader who lost a bid for Congress last month, was named Wednesday to run the state agency that includes the troubled unemployment system.

Eagle will take over a department that has nearly 1,500 workers, a $1.2 billion budget and houses about 80 statewide programs and initiatives. But it has become a lightning rod since March, as the CONNECT online unemployment system became overwhelmed with jobless claims due to the coronavirus pandemic.

“The department has suffered some setbacks, but I have no doubt that Dane is up to the task,” DeSantis said in a prepared statement. “He is personable, enjoys broad bipartisan support, and I look forward to the many successes to come.”

Eagle, in a statement, said he was “humbled” by the appointment.

“We enter in precarious times, and I look forward to working with my former colleagues to effectuate change and lead DEO into a bright future,” Eagle, 37, said.

Lawson, who had run the agency since DeSantis took office in early 2019, resigned from the $142,000-a-year job this week in what he said was the “spirit of turning the page and moving forward.”

The resignation wasn’t unexpected as DeSantis removed Lawson from oversight of the unemployment system in mid-April, handing that aspect of the job to Department of Management Services Secretary Jonathan Satter.

Satter remains at the Department of Management Services, as Eagle will now be responsible for the CONNECT system.

“The Eagle has landed! Congratulations my friend,” tweeted Danny Burgess, a Zephyrhills Republican who served in the House with Eagle and is now running for a Senate seat.

Democrats have been highly critical of the unemployment system, after CONNECT largely crashed in the spring. Also, they have criticized the amount of unemployment benefits available to Floridians, up to $275 a week for 12 weeks.

“As rumored, outgoing Rep. @DaneEagle is now the Executive Director of @FLDEO. I would like to talk to you ASAP about unemployment. Thank you!” tweeted Rep. Anna Eskamani, D-Orlando.

Florida has processed 3.62 million unemployment claims since March 15 and paid out nearly $14.7 billion in state and federal dollars to jobless people. But Eagle will face a series of issues as he takes over the system

For example, the state is working out details of a plan to provide $300 in weekly benefits from the federal government to unemployed people. The money will come on top of regular state unemployment benefits for people who can show they were put out of work because of the coronavirus and are eligible for at least $100 a week in state assistance.

Eagle’s appointment to run the department came little more than two weeks after he was narrowly defeated by state Rep. Byron Donalds of Naples in a contentious, multi-candidate primary in Congressional District 19 in Collier and Lee counties.

Among nine candidates, Donalds got 22.6 percent of the vote. Eagle was second at 21.85 percent.

Eagle, who graduated from the University of Florida, was first elected to the House in 2012 and has served as majority leader during the past two legislative sessions. Earlier, Eagle served as a deputy chief of staff to then-Gov. Charlie Crist.