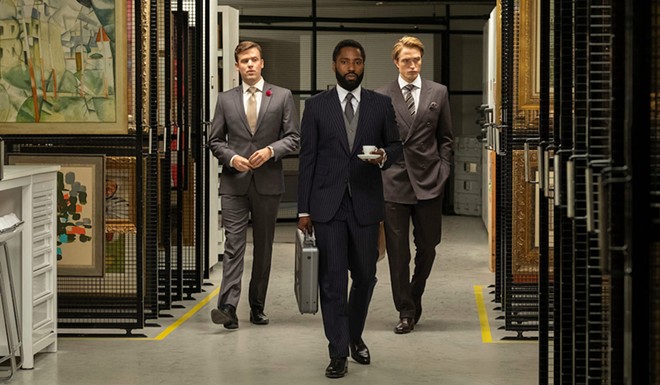 Webster’s Dictionary defines “tenet” – in a phrase that takes you 10 seconds to read – as “a principle, belief, or doctrine generally held to be true, especially one held in common by members of an organization, movement or profession.” After two and a half hours, I still don’t know how Christopher Nolan defines it.

In the first big-budget, studio release of the COVID-19 era, Nolan has delivered the eagerly anticipated follow-up to his 2017 masterpiece, Dunkirk. Perhaps haunted by the fact that we are unable to travel back in time to save the thousands of men who died on the beaches of Dunkirk, France, in 1940, Nolan has created a film whose characters save the world by communicating with the future to voyage into the past to save the present. If that sounds confusing, just wait until you see the movie.

John David Washington plays the main operative, appropriately but pretentiously referred to simply as “the protagonist.” Robert Pattinson, as Neil, is a fellow operative, though we never truly understand their relationship until the film’s climax – and then only vaguely. Adding to the bewildering array of unimpactful characters are a stereotypical Russian arms dealer (Kenneth Branagh), his estranged wife (Elizabeth Debicki), a military commander (Aaron Taylor-Johnson), an Indian arms dealer (Dimple Kapadia) and a British intelligence officer (Michael Caine, in a disappointingly brief cameo). And with the possible exception of Washington, everyone is phoning it in.

When first introduced to the concept of “inversion” (in which the entropy of people and objects is reversed), the protagonist is told, “Don’t try to understand it.” Later, Debicki’s character begs, “Just tell me what’s going on.” This dialogue hints that Nolan realizes few people will understand his story but simply doesn’t care. Instead, he seems to revel in the confusion, not caring that many lines are difficult to understand (thanks to the heavy score and masked characters) and happy that it allows him to showcase eye-popping stunts, mind-bending special effects, globetrotting location work and Hoyte van Hoytema’s 70mm IMAX cinematography.

That type of storytelling sloppiness and disrespect for his audience is unforgivable, especially considering Nolan’s status as one of the five greatest living filmmakers. Maybe he needs to travel back in time himself, to 1998, when all he had was a handheld 16mm camera, $6,000 and a great story.

The most frustrating aspect of Tenet is its unrequited flirtation with big ideas: parallel realities, cause and effect, the grandfather paradox and fate. But Nolan, for the first time ever, seems to lack the patience to discuss these ideas. Instead, Tenet is all action all the time, sacrificing heart and clarity for spectacle. So rather than offering a worthy companion to memory (Memento), transference (The Prestige), wormholes (Interstellar) and inception, Tenet gives us inversion, which is visually arresting but philosophically empty.

If you love Tenet’s themes, do yourself a favor and watch Nacho Vigalondo’s Los Cronocrímenes or the Spierig Brothers’ Predestination instead. It’ll be time better spent.